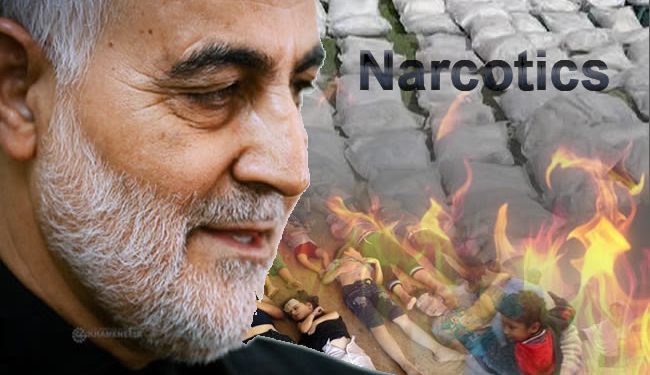 Narcotics, one of the financial sources used by Ghasem Soleimani and the Quds Force

Mohammad Baghar Zolghadr, one of the long-standing commanders of the Ramazan military base belonging to the Terrorist Quds force and the current deputy of the judicial ministry said in an interview with the Tasnim News agency affiliated to the Quds Force of IRGC (Islamic Revolutionary Guard Corps of Iran) , on December 21, 2020 “Whenever the government had difficulty in funding a project, Ghasem Soleimani, used an alternative way to raise money and created his own resources. Now it’s not necessary to go into details of that. But he himself devised new sources of finance independent of the government”.

Actually, why he did not elaborate on the details of such alternative ways of funding?

Looking through some of the news headlines in the media, provides us with some clues on this matter.

A consignment of 85 million narcotic pills which were smuggled to Europe by the Syrian regime and the Hezbollah was confiscated in Italy. Bashar Assad and Hezbollah wanted in this way to make a profit of 1 billion euros. Reports say that this is the largest shipment of narcotics ever seized by the police.

Rumania has confiscated the largest quantity of narcotics smuggled into the country. This consignment had been shipped from the Lazeghiyah port in Syria. It’s noteworthy that this port is in the control of the Iranian and the blood thirsty Assad regime. This shipment contained more than 2250 Kg of narcotics with the street value of, 71m dollars.

“The office of the Criminal Investigation in Al Muhreh province in east of Yemen, has arrested 6 Iranian sailors on the charge of smuggling a huge consignment of various kind of narcotics and has referred them to the judicial system.”

One Yamani security source said, the Iranian sailors were charged for smuggling a large quantity of different narcotics including, Marijuana, Heroine, Crystal Metametafin with the street value of 5 billion Yamani Rails. They were smuggling this horde with an Iranian ship last month when they were arrested near the coast of Al Mohreh province.

German Newspaper |Spiegel in a report published on December 3, 2019  by the name of

“How the Hezbollah operates secretly in Germany” referred to the bases of this terrorist organization  in Berlin and other German ports to recruit new members and raise money for its purchases.

Spiegel also wrote about the methods used for raising funds by this group, “The members of the Hezbollah in Germany, are active in smuggling narcotics, trading stolen cars and money laundering with proven documents in hand”.

It continues, “The main routes used by Hezbollah are from South America to Africa and from there to Europe. The smuggling of cocaine to Germany is mainly done from ports such as Rotterdam, Ant rope and Hamburg”.

The truth is that the institutions set up by Ghasem Soleimani and Quds Terrorist force, have made huge profits by smuggling narcotics and only a small portion of it has been revealed to the press.

Of course, the main brunt of financing expensive terrorist activities of the regime and the Quds force in the region, is felt by the Iranian people, in a way that poverty and paucity, has hit all levels of the society. For instance paying for the daily bread in parts has become part of the culture in the country.

Khomeini once said, “Protecting and preserving the regime is the most important duty”.

Preserving the clerical fascist regime by internal suppression, export of terrorism and warmongering are the first priorities of this regime.

Plundering the Iranian people, pillage of the National resources and smuggling narcotics to finance repression and terrorism are the most important tasks of the leaders of this religious dictatorship.

Now it is clear why Zolghadr refrains from going in to details of fund raising methods adopted by Ghasem Soleimani.