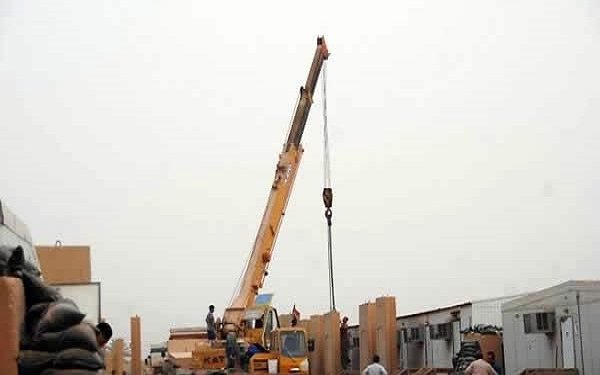 Theft and sale of the T-walls, protective shields against explosion and sand storms, by the Iraqi forces

Simultaneous with stationing of armored vehicles at Camp Liberty, the Iraqi forces are removing the T-walls surrounding the trailers at Camp Liberty. These T-wall are protective shields against explosion and sand storm which is a common occurring in this region.
Iraqi forces are steeling and selling these T-walls which were installed originally by the U.S. forces several years ago.

After
The repeated approach of the residents to the Iraqi forces and the representative of the Government of Iraq and the written and oral requests of the representatives of the residents to the representatives of the UN and US for the prevention of the removal of these walls have been futile. The residents have even suggested that if Iraqi forces want to sell the T-walls, the residents would be willing to pay for them so that the worn out and decedent trailers of the Camp Liberty would not be left even more defenseless that they are presently.
On March 28, 2012 a mortar shell hit the vicinity of the Camp Liberty and since April 20 Iraqi forces equipped with armored vehicles and heavy machine guns have been stationed in the camp police station and the four police posts in the four corners of the Camp.
The Iranian Resistance, while reminding that the residents of Ashraf and Liberty are protected persons under the Fourth Geneva Convention, and have been recognized as “asylum seekers” and “the people of concern” by the UNHCR, urges the U.S. government and the U.N. to observe their duties and responsibilities for the protection, Safety and Security of the residents and to put an end the to the aggressions of the Government of Iraq and Iraqi forces including removal of the T-walls and stationing of the armored vehicles.

Secretariat of the National Council of Resistance of Iran.
April 24, 2012