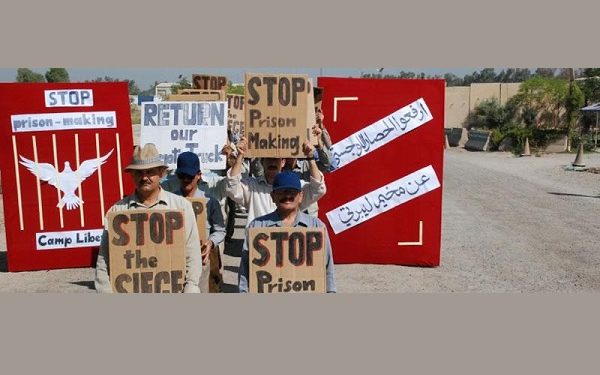 Residents displaced under Memorandum of Understanding

In 2012, Camp Ashraf residents were forced evicted from their home, camp Ashraf to the new site Camp Liberty. According to Memorandum of Understanding, signed between the United Nations and the Iraqi government, the residents humanitarian and human rights standards will be respected and the camp’s infrastructure meets the international standards. In the third clause of the agreement, it says:
“The Government of the Republic of Iraq shall undertake the management of the temporary transit locations, and shall ensure the following:
1. The transit locations meet humanitarian and human rights standards.
2. The security of those accommodated at the transit locations and of United Nations personnel carrying out their duties at or near those locations, to be ensured through officers trained for this purpose with the assistance of the United Nations.
4. The Government shall facilitate and allow the residents, at their own expense, to enter into bilateral contact with contractors for provision of life support and utilities such as water, food, communications, sanitation, and maintenance and rehabilitation equipment…”

Officers in Charge of Camp Liberty – violation of second provision
However, this very clause has been totally violated by the Iraqi government. The Iraqi National security advisor, Falih Fayadh, a known element whose allegiance to the Iranian regime is without question, is in charge of Camp Liberty file. Thus, the outcome is very clear – at the behest of his Iranian sponsors, he has enforced a comprehensive siege on the residents. He has appointed disreputable characters involved in incursions of Ashraf, such as Colonel Sadeq Mohammad Kadhem, Major Ahmed Khozeir and Captain Heydar Azab as “Camp management”. That is violation of second provision of the above clause. They are the officers conducting the siege and daily harassment on the ground.

The Logistical Siege – violation of first and fourth provision

The policy on Camp Liberty has been to maintain maximum pressure on the residents through suppressive measures under various pretexts to deceive UNAMI and international counterparts. They try to give the impression that the situation of Camp Liberty goes on smoothly and the problems on the ground are merely technical matters. One main aspect of the siege is the ongoing logistical siege which is performed by systematic daily restrictions and harassment.

These restrictions are imposed systematically and on a permanent basis in such manner that all maintenance and logistics supplies are banned. Shipments of fundamental items are prevented and returned back. Some rejected items procured by residents and restrictions are as follow:
– Requirements such as water pump, pipe and fittings for repair and maintenance of Camp’s water supply system.
– Necessities and supplies to repair and maintain the power generators and power distribution system inside the camp.
– Blocking entry of spare parts for septic trucks
– Preventing entry of cooling devices.
– Prohibition on necessary spare parts for repair purpose of fridges, A/C’s and other cooling devices.
– Ban on fabrics, clothes, stationery, insecticides and other essential items.
– In addition to these restrictions, the Iraqi Camp management creates long delays in the commuting of septic trucks and/or limiting the time which both residents’ and Iraqi contracted septic trucks can operate
– Blocking fuel and gasoline supplies into the camp
– Prohibition on maintenance supplies to rehabilitate the worn-out trailers and facilities
– Banning the delivery of cell phones, computers and other communications and computer-related devices into the camp.
– Creating delays in food deliveries and mishandling during cargo checks
– Local contractors interesting to be employed for pavement construction, cooling device maintenance and etc., are threatened, humiliated and returned back.

The method of evading and prevaricating
Whenever the Iraqi government is questioned on the restrictions, it simply resorts to evasion and prevarication. It has become master in creating crises round the year. During the hot season it cuts off fuel supplies at its leisure, creating shortage of fuel therefore power generators stop and halting the entire lifecycle. As soon as the international pressures increase, it takes easy on fuel and launches another crisis for a while through a new pretext. For instance, it prevents commuting of septic trucks without reason during the rainy season, causing overflow of raw sewage into sleeping quarters.