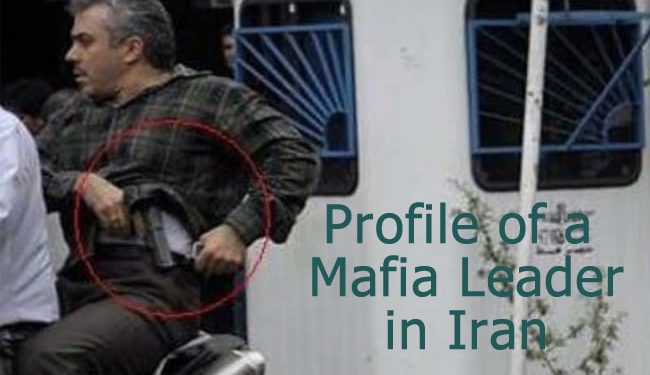 Outside Iran, few will have heard the name Hassan Ra’yat. He is an associate of former Iranian president Mahmood Ahmadinejad who has quietly bought influence and power through millions of dollars of bribery and fraud.  Now with a power struggle intensifying as Iran’s Presidential elections approach, some state media are trickling out new details about this key mafia leader.

For instance, in its April 15 edition, Sharq daily affiliated with ‘reformists’ shed light on the financial crimes of Seyyed Hassan Mirkazemi, known as Hassan Ra’yat.

Ra’yat was detained in August 2018 for involvement in a €400 million fraud case; involvement in a network fraud targeting banks, money laundering, and bribery; using forged documents; influencing officials through personal relationships; and cutting and drying 206 trees.

“The ties of Ra’yat, who has a 400-page indictment, with some influential people display the depth of corruption in judicial cases. His lifestyle and relationship with billionaire Babak Zanjani, his images with a pistol on a motorcycle in 2009, and his legendry zoo have turned him into an unforgettable offender,” Sharq wrote. “The ‘Lost Heaven’ or Hassan Ra’yat’s zoo, where he was maintaining 17 tigers according to some observers, was a place Ra’yat used to invite and visit influential individuals.”

Moreover, on August 6, 2019, journalist Yashar Soltani blamed the state broadcaster IRIB for concealing Ra’yat’s crimes. “If IRIB dares, it should broadcast the images of Hassan Ra’yat’s Lost Heaven in Karaj road, which is the outcome of monopolizing and plundering public assets. Tell the people that this lost heaven was the hangout for which high-ranking officials and influential and prominent figures? How did he obtain the money and permission for his collections of guns, motorcycles, animals, etc.?” Soltani tweeted.

According to the attorney-general, he was a member of an expanded and organized corruption network. He invited and visited influential officials at his personal zoo in Karaj, the capital of Alborz province. Ra’yat had also special ties with some prominent economic criminals like Akbar Tabari, Judge Gholamreza Mansouri, Babak Zanjani, and Hamidreza Bagheri-Dormani, and Saeed Mortazavi.

Some of Hassan Ra’yat’s Accomplices

Akbar Tabari was the former executive manager of the Judiciary. Using his influence and receiving massive bribes, Ra’yat gained a stellar capital. Following the replacement of Sadegh Amoli Larijani with Ebrahim Raisi as the Judiciary chief, Raisi purged Larijani’s agents and revealed corruption cases. In fact, as Larijani is a potential figure for taking the Supreme Leader’s seat, Raisi sent a message to the former Judiciary Chief, warning him about his corruption cases.

Judge Gholamreza Mansouri was one of Tabari’s aides. During Tabari’s trial, jurists accused Mansouri of a €500,000 corruption case. He had already fled to Romania. Mansouri had rejected the allegations and announced his readiness to return to Iran. However, his lifeless body was found in Bucharest a day before his flight to Tehran on June 19, 2020. Authorities reported that Mansouri committed suicide, but unconfirmed reports say that he was thrown down in a honeytrap planned by Tehran.

Babak Zanjani is a billionaire who had described himself as an ‘economic member of the Basij,’ the paramilitary force of the Islamic Revolutionary Guard Corps (IRGC). Since 2003, Zanjani aided President Mahmoud Ahmadinejad’s government to circumvent economic sanctions and purchase oil and other condensate. According to the New York Post, Zanjani had transferred money for the IRGC Quds Force to carry out the 2012 attack on the U.S. embassy in Benghazi, Libya.

Meanwhile, Zanjani’s name was raised in the case of Reza Zarrab, who had been arrested in Turkey for smuggling gold. During the hearing, Zarrab had confessed that he had no authority, and he was working under Zanjani’s command.

Furthermore, in October 2014, Alef website quoted Iranian MP Amir-Abbas Soltani as saying, “Many of the Ahmadinejad administration’s high-ranking officials, including the Minister of Economic Affairs and Finance, the Governor of the Central Bank of Iran (CBI), and the Minister of Oil were involved in Zanjani’s offences… [Zanjani’s] activities continued even after his detention.”

Hamidreza Bagheri Dormani was a wealthy merchant, known as Iran’s sultan of tar. He was hanged for fraud and ‘corruption on earth’ on December 22, 2018. Notably, tar-related allegations were only one of Bagheri Dormani’s files. There were 33 other offenders, which lengthened the trial for four years.

According to Abolqassem Salavati, the judge in the case, several official experts of the judiciary and high-ranking employees of Iran’s Bank Melli were among the offenders. However, many of them evaded trial due to unclear reasons.

As a notorious judge, Saeed Mortazavi was involved in severe violations of human rights. He has been described as “butcher of the press” and “torturer of Tehran” by some observers. The Canadian government also accused Mortazavi of the torture and death in custody of Iranian-Canadian photographer Zahra Kazemi.

According to a parliamentary report leaked in 2010, Mortazavi was responsible for the abuse, torture, and death of dozens of political prisoners at Kahrizak detention center in 2009. He played a crucial role in the suppression of the 2009 protests, which had ignited after the reelection of Mahmoud Ahmadinejad.

The history of Mortazavi’s friendship with Ra’yat might go to the crackdown on protesters in 2009. However, Ra’yat introduced Zanjani to Mortazavi, who was then the CEO of the Social Security Organization. “I did not know [Zanjani] and his company at all. One of my friends named Kazemi [Ra’yat], who is a highly trusted force and was his friend, called and introduced him to me,” Mortazavi had said in an interview with Sharq.

On the other hand, Fazel Larijani, the younger brother of former Parliament [Majlis] Speaker Ali Larijani and former Judiciary chief Sadegh Larijani, had spoken with Mortazavi about Zanjani’s appeals for purchasing companies affiliated with the Social Security Organization. Ahmadinejad’s allies revealed the video of their talks in a Majlis session pressuring the Speaker to aquacise to their plan about the Ministry of Labor and Social Welfare.

According to the IRGC-controlled Fars news agency, Mortazavi and Zanjani had signed a €4-billion deal over 137 companies of the Social Security Organization. However, state media revealed the deal and prevented = its implementation. The report said that Ra’yat was an intermediary in the largest of the suspect contracts.

Ra’yat Is Neither the First nor the Last

Nonetheless, Hassan Ra’yat is not the first individual who merged corruption with suppression in the history of Iran and elsehwhere. A glance at the Nazi regime’s record in Germany shows that cruel crackdowns on Jews, dissidents, the disabled, and other minorities were only one side of the coin. The other side, which was not subjected to debates, was the massive corruption among Nazi officers, whether in the Armed Forces or lower ranks.

August von Mackensen, Walther von Brauchitsch, Heinz Guderian, and Wilhelm Ritter von Leeb, were high-ranking officers who won considerable bribes in the form of cash, estates, and tax exemptions in exchange for their loyalty to Nazism. In addition, there are many stories about SS officers’ corruption in forced labor camps and conquered cities and towns.

The above-mentioned facts along with Hassan Ra’yat’s case prove that professing loyalty to the Führer or to the Islamic Republic’s principles and its Supreme Leader is merely an excuse for covering up an ulterior motive: personal privileges and wealth.

In practice, just like the Supreme Leader Ali Khamenei, who reigns over a $200-billion empire, his loyalists cannot ignore the exploitation of national resources, particularly while they can fill their pockets with total impunity.

In this context, the loyalty of Ra’yat and his ilk to the Islamic Republic system in Iran stems more from greed for personal privileges and wealth than it does in their ‘faith.’

“Corruption will be created immediately when several people obtain above-the-law allowances. The figures are not low, the annual revenue associated with smoking in Iran is between $1.3-1.48 billion. This figure tempts international smugglers, let alone our smuggler brothers,” said Ahmadinejad in the Specialized Conference on New Strategies in Prevention and Combating Smuggling Commodity and Currency on July 4, 2011.