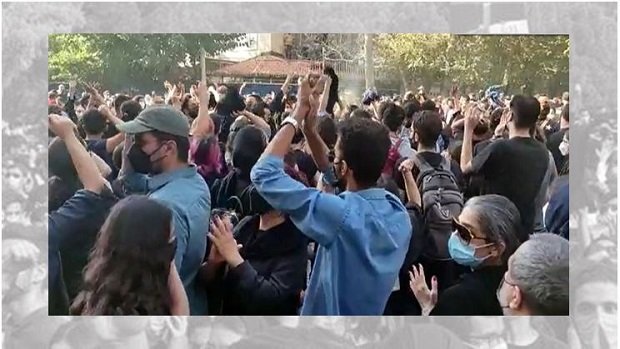 Protests are surging across Iran

Protests are surging across Iran. Sparked by the death of a young woman at the hands of the regime’s morality police, demonstrations soon turned into what many observers consider the Iranian revolution. Iranian people have shown their sheer will to topple the regime, but what would be the world’s response and reaction?

Streets across Iran have been witnessing people’s growing rage and exhilaration. The diversity of protesters reflects their common desire for regime change.

In response to the increasing wave of dissent across Iran, the clerical regime has resorted to brutal oppression by deploying anti-riot and other armed forces to different towns. Reports and videos obtained by the Iranian opposition show the security forces opening fire on unarmed civilians.

According to the state media, dozens of protesters whom the regime has named “the leaders” have been arrested and taken to Evin Prison and a military base in Tehran’s Afsarieh district.

According to the People’s Mojahedin Organization of Iran (PMOI/MEK), over 400 protests have been killed so far by Iran’s ruling theocracy.

Despite the heavy crackdown, Iranian protesters continue their uprising. Their spirit is unbreakable, and their dedication to liberating their country is adamant. They have lost fear. Every bullet the regime’s thugs fire adds to the determination of protesters. Every martyr that falls, another courageous protester fills the spot. Iranian women and youth who lead protests have indeed created a modern legend with their bravery, and the regime has failed to quash them.

The Iranian people’s steadfastness, particularly the Iranian women’s perseverance, has resulted in unprecedented international solidarity. Renowned politicians, lawmakers, governments, and even actors and singers have praised the Iranian people’s bravery and condemned the regime’s atrocities.

But as time elapses, the world community should take its support of the significant Iran protests to the next level. Iran is on the cusp of revolution, much like the anti-monarchy revolution in 1979.

Unlike the Shah’s regime, which yielded under international pressure and the people’s uprising, the clerical regime recognizes no boundary in violence in a bid to hold its power. The recent footage of the oppressive forces killing protesters and the mounting number of victims are testaments to this fact.

According to the Universal Declaration of Human Rights, the Iranian people have the right to legitimate self-defense against the regime’s unbridled violence. Iranians are also entitled to the right of self-determination and thus have the right to choose their future freely.

When the Syrian uprising happened, thousands of international condemnations followed. But the world leaders failed to act when needed to stop Bashar-al Assad’s bloodshed. The same thing happened in 2009, with the US administration turning a blind eye to the Iranian people’s uprising. The world community’s inaction has only emboldened authoritarian regimes to commit crimes against humanity with impunity.

Now Iranians and their organized resistance have shown they will not back down from their quest of having a free country. The ball is now in the court of the international community. Would they stand on the right side of history and live up to their moral and legal obligations or will they just stand by and keep up with their condemnations?