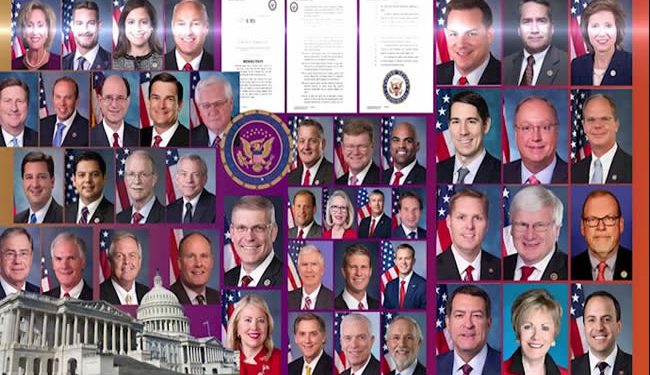 H. Res. 118 (IH) – Expressing support for the Iranian people’s desire for a democratic, secular, and nonnuclear Republic of Iran and condemning violations of human rights and state-sponsored terrorism by the Iranian Government.

More than 100 Democratic and Republican House lawmakers have called on President Biden to “remain firm” in holding the Iranian government accountable for its destabilizing activities in the region, including its nuclear program, and hold it accountable for human rights violations.

The bipartisan letter was sent to the president Thursday and corresponded with the introduction of a resolution co-sponsored by 112 lawmakers from both sides of the aisle reaffirming U.S. support for Iranian civil society.

“For the sake of national security, peace, regional stability, and the Iranian people’s desire for freedom, the United States remains firm in holding the Iranian government accountable both for its nuclear and other destabilizing activities in the region; such as, its support for terrorism, development of ballistic missiles, and human rights violations against its own people,” the lawmakers wrote to Biden.

The resolution, which is used as a record of conscience for Congress and is not legally binding, expresses U.S. support for Iranian civil society and their aspirations for a secular, democratic, non-nuclear country. It also calls for human rights violators to be held accountable.

The measure, H.Res.118, is backed by the Organization of Iranian American Communities (OIAC).

“Working with Iranian American Community Members in 41 U.S. States, over 112 Bipartisan Original co-sponsors of H.Res.118 are affirming Congressional consensus on the need to hold Iranian regime accountable for human right violations and international terrorism,” said Majid Sadeghpour, political director for the OIAC, in an email to The Hill.

The resolution comes following the conviction this month of an Iranian diplomat in a Belgian court. The diplomat was identified as an undercover secret agent, accused of plotting a thwarted bomb attack on an exiled Iranian opposition group in France. The case is cited in the resolution as evidence of Iran’s terrorism activities.

“The House of Representatives condemns past and present Iranians state-sponsored terrorist attacks against United States citizens and officials, as well as Iranian dissidents, including the Iranian regime’s terror plot against the ‘Free Iran 2018-the Alternative’ gathering in Paris,” the resolution reads.

The resolution also cites the killing of dozens of protesters in Iran in 2017 and the thousands of protesters massacred in 2019; the execution of wrestling champion Navid Afkari in September that drew worldwide condemnation; and the detention of thousands more demonstrators and activists.

Its introduction comes amid the Biden administration’s push to return to the 2015 nuclear agreement with Iran, formally the Joint Comprehensive Plan of Action (JCPOA), that former President Trump withdrew from in 2018.

Critics of the nuclear agreement say that it does not completely block Iran’s path toward building a nuclear weapon and fails to rein in its destabilizing activities in the region — including its ballistic missile weapons, support for proxy militias and funding for terrorism. In addition, they argue that the JCPOA does not address Tehran’s human rights abuses at home.

Iran, which remains a party to the nuclear accord with other international signatories, has spoken out against pairing the nuclear issue with any other activities that are condemned by the international community.

In addition, the country has breached the commitments of the deal by increasing its enrichment of nuclear-weapons grade uranium in what they say is a reaction to the sanctions campaign and the U.S. absence from the deal.

It has further produced uranium metal which can be used to make a bomb, the International Atomic Energy Agency, which has access to monitor Iran’s nuclear activities under the terms of the JCPOA, said on Wednesday.

Biden has said he is prepared to reenter the nuclear agreement if Iran rolls back its uranium enrichment and returns to the parameters of the deal.

But Tehran has rejected these terms, saying the U.S. must lift sanctions and return to the deal before they can begin reversing course — the two countries seemingly locked in a standoff.

In Washington, a majority of Democrats have put their support behind Biden’s push to reenter the nuclear deal, including senior and more centrist Democrats who opposed the deal in 2015.

In December, 150 House Democrats signed a letter of support behind Biden reentering the deal, a key number that could block congressional attempts to prevent such a move.

Fifteen of those Democrats also signed onto the resolution Thursday, including Sherman who said support for human rights in Iran and support for the president rejoining the nuclear deal are “not inconsistent.”

“This resolution focuses on human rights and democracy in Iran. Democrats support democracy and human rights. Domestically and abroad,” Sherman wrote in an email to The Hill. “We can support negotiations that are designed to get Iran to re-enter the nuclear deal, to reapply constraints on nuclear activity in return for sanctions relief. At the same time we can advocate for human rights and democracy. Those two things are not only not inconsistent, they are fully complimentary.”

*The Hill is an American digital media company.It is owned by Capitol Hill Publishing of Congress

Iran is blackmailing about its convicted diplomat in a Belgian court