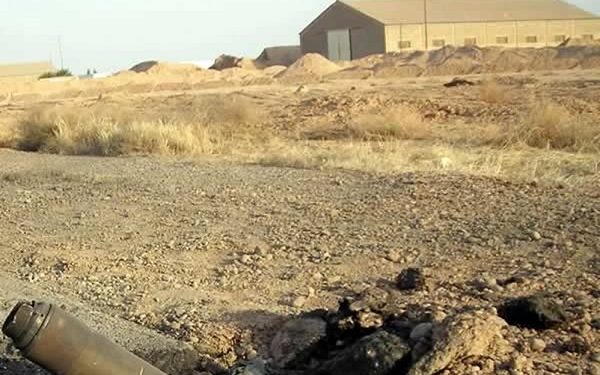 Call on UN Security Council, MNF-I, and Iraqi government to punish religious fascism, and to evict the mullahs’ regime and to expel Kazemi Qomi, a commander of terrorist Qods force in Baghdad, and to close the center of terrorism and espionage

Retaliating the support of 3 million Iraqi Shiites of the PMOI in Ashraf City in Diyala province- Iraq, desperately reacting to removing the PMOI from the terrorist list, and frantically responding to the greatest gathering of the Iranians in Paris with the presence of Resistance President- elect, the mullahs’ regime once again attacked the Ashraf City this morning with Grad missiles.
The attack was carried out at 05:25 this morning 4th July during which none of the Ashraf residents were hurt.
On June 29 (the day after the grand gathering in Paris), the mullahs’ regime announced through its state news agencies, “The UK and the EU Parliament efforts for removing the PMOI terrorist group from the list of terrorist organizations revealed the hypocritical nature of the West”, and “This will prompt the people of Iraq to launch actions in future to confront this group’s crimes and to put an end on the presence of this terrorist group in Iraq for ever”. (Mehr, state- run News agency)
Moreover, claiming that “the PMOI massacred 150 thousand Iraqi Shiites in cooperation with Iraq’s Republican Guard’’ in 1991, the mullahs’ regime obligated the Iraqi government to arrest the PMOI leaders and “to hand them over to Iraq’s criminal court.”
The next day (Monday, June 30), the Arabic television network in Iraq affiliated to the Iranian regime by the name of al-Furat, relayed the order of regime’s vali-e faqih (supreme leader) for attacking and full elimination of Ashraf City, and asked: “Isn’t it necessary to have attacks like ‘Lion Roar’ (that Iraqi forces carried out in Mosul) to eliminate groups like this terrorist group from Iraq?
Yesterday (Thursday 3 July), Ali Dabbagh, the spokesman of the Iraqi government announced the receipt of order issued from Tehran and declared, “The warrant to arrest some of the leaders of this organization has been issued because of infringing the known principles and standards.”
Simultaneously yesterday, Abdul Aziz Hakim, regime’s known element in Iraq, repeated the scandalous lie by the religious fascism ruling Iran about the massacre of the Iraqi Shiites by the PMOI and asked again for the expulsion of PMOI from Iraq.
Previous missile attack on Camp Ashraf by the terrorist Qods force was carried out on May 26 after the UK Court of Appeals ruled to the annulment of the terrorist label on PMOI.
Calling for expulsion of the PMOI by the mullahs’ regime’s agents, unfounded claims, arrest, trial and punishment of the PMOI leaders, and war aggression against the protected persons in Camp Ashraf is trampling the non-refoulement principle and is flagrant violation of International Law, International Humanitarian Law, and the Fourth Geneva Convention, and is considered a blatant war crime.
The PMOI calls on the UN Security Council, ICRC, UNHCR, MNF-I and the government of Iraq to condemn the warmongering and war crime committed by the Iranian regime in Iraq against protected persons and to punish the religious fascism ruling Iran. It also calls for evicting the Iranian regime from Iraq, especially the expulsion of Kazemi Qomi, a commander of the terrorist Qods Force in Baghdad, and shutting down the regime’s embassy in Baghdad, the main center for terrorism and espionage as well as a source of insecurity and instability in Iraq.

Media Coverage of the Second missile attack against Camp Ashraf

The People’s Mojahedin Organization of Iran accused Iran of attacking Camp Ashraf in Iraq which belongs to this organization.

On Friday US Army acknowledged that there has been a mortar or missile attack against a camp in southeast Baghdad where the Iranian opposition group is resident. David Russell, the spokesman for the US military mentioned that the missile did not hit the camp and there has been no casualty.

Legal opinion on situation of Ashraf City – by David Kilgour