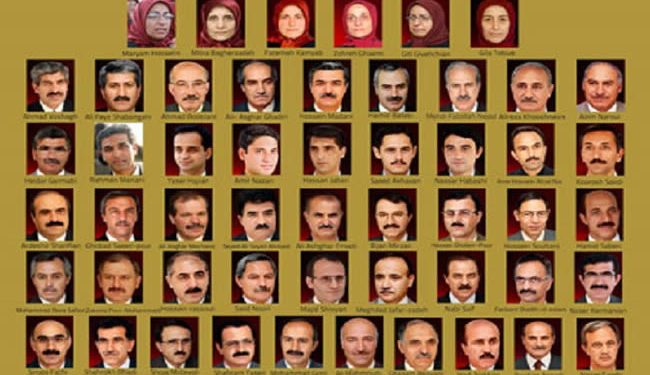 Sept. 1st, the anniversary of the massacre of 52 residents at Camp Ashraf

Fifty two unarmed and defenseless Iranian dissidents, all members of Iran’s main opposition group, the People’s Mojahedin Organization of Iran, PMOI (Mujahedin-e Khalq, MEK), were slaughtered and another group of seven, including six women, were abducted by Iraqi forces at the behest of the regime in Iran.
Then-Iraqi Prime Minister Nuri Maliki’s military forces had executed many residents with their hands tied behind their backs, execution-style, during the September 1, 2013 massacre. Wounded residents, all of who were ‘protected persons’ under the Fourth Geneva Convention and were “guaranteed” protection by the U.S. and U.N., were shot dead in the camp’s clinic.
As the massacre was underway on September 1, a very senior U.S. official in Washington, where it was just after midnight, acknowledged in an email that the Obama administration had been alerted to the attack immediately after it had begun and was in contact with the U.S. Embassy in Baghdad regarding the attack.

A day after the massacre, the UN Secretary-General’s Deputy Special Representative for Iraq György Busztin visited Camp Ashraf and on September 3 UNAMI declared: “Inside the camp, the delegation witnessed 52 bodies in a makeshift morgue. All the deceased appeared to have suffered gunshot wounds, the majority of them in the head and the upper body, and several with their hands tied. The delegation also saw several damaged buildings, including one burnt, and was shown quantities of explosives.”
On September 19, 2013, then-European Union foreign policy chief Baroness Catherine Ashton confirmed that the hostages were being held at an Iraqi prison and face the threat of extradition to Iran in violation of the non-refoulement principle. Amnesty International on November 19, 2013 issued an Urgent Action saying: “The seven Iranian exiles abducted on 1 September are now known to be held by the Iraqi security forces at an unofficial detention facility in central Baghdad. They are at risk of torture and other ill-treatment and could be forcibly returned to Iran.”

Struan Stevenson, a former President of the European Parliament’s Delegation for Relations with Iraq (2009 to 2014) and current President of the European Iraqi Freedom Association (EIFA), has written an authoritative account of the September 1 massacre in his book “Self-Sacrifice: Life with the Iranian Mojahedin,” published in June 2015. In the chapter “The Final Ashraf Atrocity,” Mr. Stevenson recounts:

“Under the agreement of the UN and US, 101 residents had remained behind in Camp Ashraf to negotiate the safe disposal of their movable and fixed properties, valued at many millions of dollars. Lawyers employed by the Ashraf residents to negotiate the sale of their properties were threatened by the Iraqi regime and scared off, while Prime Minister al-Maliki, acting on the instructions of his sponsors in Tehran, cut off supplies of water, food and electricity to the camp in late August in an attempt to oust the remaining residents and loot their belongings.
“Around midnight on Saturday 31 August 2013, several battalions of the Iraqi military and special SWAT forces, acting on orders directly from Prime Minister Nouri al-Maliki, stormed the camp under cover of darkness. The attack began at 6am on 1 September. Anti-tank rocket-propelled grenades and mortars were fired into the sleeping quarters of the refugee camp, and the fleeing residents were then machine-gunned. 52 deaths and dozens of severe injuries resulted. Many of the residents were handcuffed and then summarily executed by being shot in the back of the head. Nine seriously injured residents were carried to the camp clinic by their colleagues, but were then executed by Iraqi military personnel on their hospital beds. Seven injured residents, six women and one man, were kidnapped.
“Their mission was clearly to take a few hostages and kill all of the rest. The 42 survivors were the ones who the killers could not find, which explains why General Jamil Shemeri, commander of Diyala police, who had personally taken part in this operation, hearing that there were some survivors, demanded to know how the hell they were still alive?
“The systematic massacre continued into Sunday 1 September for some hours, and despite repeated pleas for the UN or US to intervene, there was complete silence and inactivity from both. While under attack, the Ashraf residents directly telephoned UNAMI, the American Embassy and the NCRI headquarters in Paris. Indeed some of the bodies found later were still clutching phones. The Second Secretary in the US Embassy in Baghdad, who was informed 30 minutes after the start of the massacre, replied that he would urgently follow this case. But it was only after 12 hours that a local UN official finally went to the scene, by which time the massacre was over. By then the Iraqi government was already denying that any of their military had entered the camp. The international media, focused on the unfolding civil war in Syria, studiously ignored this new atrocity at Ashraf and there was little or no coverage. I watched horrifying films of the atrocity taken by some of the Ashrafis. In one film, Iraqi soldiers can be seen shooting dead unarmed civilians and then, spotting the cameraman, running towards him firing their weapons. The soldiers can be seen bursting through a door where the cameraman had taken refuge and the final footage shows them raising their Kalashnikovs and firing a burst directly at the camera, which then tumbles to the ground. This brave Ashrafi died filming his own murderers.
“This final massacre at Ashraf was as avoidable as it was predictable; myself and many members of parliament, congressmen, senators and leading judicial and military figures in Europe and America had warned for months that a massacre was imminent. In late August, intelligence reports from inside Iran made clear that the Mullahs saw the Syrian crisis and the West’s ineffectiveness as ideal cover for a brutal strike. Despite warnings to US Secretary of State John Kerry and others of the inevitability of an attack, no action was taken to protect the unarmed men and women in Ashraf, who subsequently forfeited their lives.
“Having achieved their objectives in Ashraf while the West continued to bicker and dither over the crisis in Syria, I warned that we could now expect similar pre-emptive action against the 3,000 residents in Camp Liberty. Despite being under the supposed protection of the UN, these refugees had suffered several vicious mortar attacks leading to 10 deaths. All evidence pointed to the involvement of the Iraqi regime and their Iranian allies in these attacks.
“I warned that as Ban Ki-moon, Ashton and Obama wrung their hands in feeble impotence, the killing of the innocent would continue apace. Tehran and Baghdad, both supporters of the brutal Assad regime in Syria, were rubbing their hands together in glee that the West could simply ignore the gassing with chemical weapons of over 1,400 people in Damascus and the scorching of school children with napalm in Aleppo. What perfect cover for their own vicious assault on Ashraf! I said that to ignore this criminal and barbaric attack on Ashraf would be to give the green light for a full-scale massacre at Camp Liberty. The Ashraf agony could have been avoided if the West had heeded the warnings. The liquidation of Liberty would inevitably follow unless al-Maliki and his Iranian sponsors were held to account now. ’Maliki and his Nazi thugs must be indicted for war crimes,’ I said. ’The West must sever all further aid to Iraq until Maliki has been arrested.’
“The case of the seven hostages has not yet been solved. Their fate remains a mystery. Despite clear evidence that showed they were being held in Baghdad by the Iraqi government immediately following the massacre, the Americans did not take the proper action to seek their release.”

Despite the sheer brutality of the massacre and the chorus of international condemnations, no United Nations investigation was ever conducted and no one was ever held to account even though from the outset the identities of the masterminds and main culprits were evident.
Over the past several years, the Iranian Resistance has repeatedly called on the UN Secretary-General and the High Commissioner for Human Rights to conduct an independent and comprehensive investigation into the September 1 massacre and to bring the culprits to justice and not to allow Nuri Maliki and Ali Khamenei (the Iranian regime’s Supreme Leader) to cover up this great crime against humanity.

The Washington Times: call on President Obama, break your silence, lives are at stake