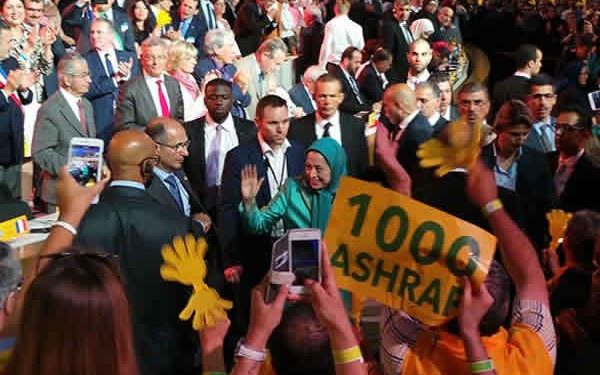 striking contrast to the mullahs’ Iran

By Lord Maginnis of Drumglass, The Diplomat
Tuesday, 19 July 2016

The nuclear deal will not bring a moderate Iran. To achieve that, Iran’s democracy activists need our support.

A full year has passed since the Iranian regime accepted a nuclear deal with the West which would boost the regime and allow economic sanctions against Tehran to be lifted. The reciprocal of that entailed an abandonment of the nuclear program and hopefully could be a precursor to moderation — a softer, gentler Iran. Now that year has passed with these hopes being far from reality. The sad lesson must surely be apparent — the only real opportunity for change must lie in giving tangible support to active and moderate Iranians like those who assembled in Paris last weekend.

The Iranian regime has increased its support for the murderous Assad regime; for Hezbollah; for Shiite militias and other terrorist groups abroad. It continues to directly participate in regional conflicts and at home the execution, in record numbers, of its their own people. Far from being a moderate, President Hassan Rouhani has exceeded the brutality and extremism of his predecessor, and all the while the nuclear program remains largely covert, while more overt segments show signs of further development. Ballistic missiles, executions, and regional turmoil are not signs of moderation by any stretch of the imagination.

Just because the Iranian regime is full of hard-liners does not mean that the Iranian people are. Last Saturday, an impressive 100,000 Iranian expatriates and their international supporters gathered in Paris in a massive show of force. The keynote speaker was Maryam Rajavi, the charismatic president-elect of the National Council of Resistance of Iran (NCRI) who has assembled a solid show of support among Iranians at home and abroad.

Mrs. Rajavi has for some years presented a stark contrast to the Iranian status quo, calling for a truly democratic Iran and saying, “A new era will dawn in Iran; a society based on separation of religion and state, and gender equality will blossom.” Her words, while drawing a strong reaction from the highest levels of the Iranian regime were warmly received by both supporters in Paris and those other supporters who still must run the gauntlet within Iran’s borders. It is this moderation that not only brought thousands of Iranian supporters, but a large contingent of leading international politicians as well.

The most striking aspect of the NCRI’s international political support is that the list of politicians attending would rarely, if ever, be seen together except at this kind of event – a response to the national tragedy that exists under Rouhani and the Mullahs. U.S. Democrats such as Howard Dean and Bill Richardson were joined by Republicans Newt Gingrich and John Bolton. Likewise, European politicians in attendance, parliamentary delegations, and global political personalities covered the entirety of the political spectrum. In such a polarized political era, to have such cooperation and agreement on a single issue should not be understated.

Among the more notable attendees was Turki bin Faisal Al-Saud, a prominent member of the Saudi royal family, its former intelligence chief and a former ambassador to the United States and UK. Surely this is a significant and major indicator that the momentum is shifting against the Iranian regime. Prince Turki’s attendance marked the first time Saudi support was given publicly to any group so opposed to the Iranian regime. This was not simply a gamble, but a purposeful and calculated statement by the Saudis, indicating an expectation that the NCRI will continue to gain momentum that could ultimately lead to regime change.

Tehran’s immediate hysterical reaction to the gathering and its message included summoning the French ambassador to Tehran with the aim of intimidating the French for allowing a peaceful rally to take place in the “City of Light.” Surely that’s a clear indication that the theocratic regime in Tehran is feeling the heat and that NCRI opposition is, increasingly, making an impact internationally.

The huge numbers of grassroots supporters, the political attendees of every political and democratic hue from so many countries is a huge endorsement. The reaction of the Mullah’s regime sends a very clear message.

Though regime change is unlikely to happen overnight, the NCRI is a viable, moderate alternative that the hard-liners in Tehran regards as a threat. Western governments and others in the region should take this message seriously and perhaps reconsider their position in how they seek to reform a regime that has, time without number, broken its commitments and been consistently so deceitful and destructive.

Mrs Rajavi and her formidable workforce have a clearly enunciated, pluralistic, and democratic vision. The free world should not be content to relegate this to merely a once-a-year event.