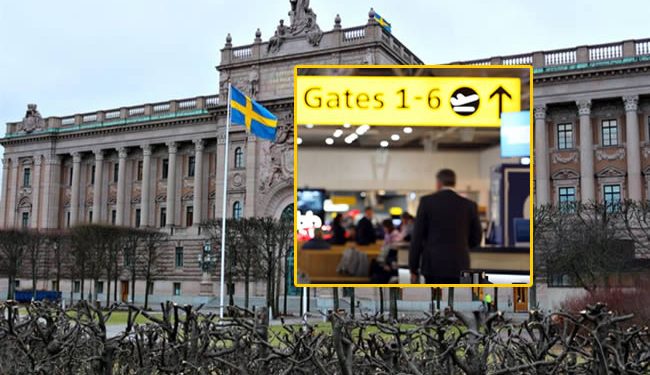 Sweden’s Svenska Dagbladet newspaper reported on March 20 that a couple under investigation on charges of planning a terror operation had been deported to Iran. The couple had been arrested last year.

Quoting a senior Swedish prosecutor, the newspaper wrote, “The deportation of this couple was fast and without issue, and [Iranian authorities] welcomed them.” The official also stressed that the couple had been assigned to assassinate several people.

The deported terrorists, Fereshteh Sanai and Mehdi Ramezani were in Sweden under fake identities, Salma Khormaee and Foad Malekshahi as aliases and presented themselves as Afghan citizens when they landed in Sweden in 2015.

Handing over these terrorists to the Iranian regime comes as Tehran has turned Sweden into one of its European hubs for plotting terrorist operations against dissidents.

In its yearly report, Sweden’s security policy declared that Iran, China, and Russia were the most active security threats in Sweden. The Swedish security authority stipulated that Iran’s regime is direct threat to Sweden’s national security. According to this report, Sweden has become a safe haven for Iranian spies, and the regime is using Sweden to plot its espionage and terror operations elsewhere in the world.

The continued discovery and arrest of Iranian spies and terrorists who pose as refugees, reporters, and other covers show the level of the regime’s activities in Sweden.

In 2020, Swedish authorities arrested a terrorist named Mohammad Davood Zadeh Loloee, with dual Iranian and Norwegian nationalities, who was dispatched to gather information against Iranian dissidents in Sweden. Swedish authorities extradited him to Denmark for prosecution. He was reportedly in touch with a person named Sajjadi, one of the Iranian regime’s officials coordinating the regime’s terror activities abroad.

Swedish authorities arrested another Iranian regime spy named Raghdan Alharvishavi in 2020. Alhavishavi, an Iraqi national, took photos and videos of Iranian dissidents while posing as a journalist. He was sentenced to two years in prison on espionage charges.

Iran’s regime is taking advantage of the lack of resolve by European states to establish centers of espionage and terrorism in European countries, including the Imam Ali Center in Stockholm, which has dozens of offices across Sweden.

The return of the two terrorists to Iran comes against the backdrop of a growing wave of terrorist activities by the Iranian regime on European soil. In 2021, a court in Belgium sentenced a career Iranian diplomat and his accomplices to 15-20 years in prison for plotting a terror attack against the large rally of the Iranian Resistance in 2018. Other attempts have happened in Albania. All evidence indicates that the regime is using its embassies to coordinate and plot terror and espionage operations.

The Iranian Resistance condemned the return of the spies to Iran’s regime and demanded the shutdown of the regime’s embassies and spy centers across Europe. Agents and operatives of the Intelligence Ministry, the IRGC, and the terrorist Quds Force must be prosecuted, punished, and expelled from European territory. The MOIS and the IRGC must be included in the European Union’s terrorist list.