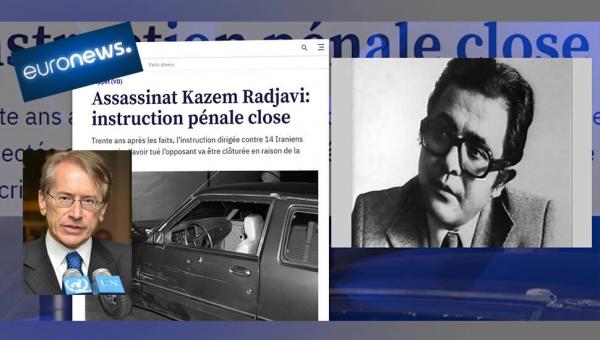 On April 24, 1990, Iran’s most renowned human rights activist, Kazem Rajavi was ambushed in Geneva and killed as part of an alleged, highly-coordinated assassination plot involving at least 14 Iranian operatives. It was not the first such killing – and it would not be the last. Over the years, the theocratic regime carried out assassinations of dozens of opposition activists and expatriate intellectuals, solidifying its reputation for blatant human rights violations; not just at home but throughout much of the world.

The foreign assassinations were accompanied by truly shocking crackdowns inside the Islamic Republic itself. In a sense, these “chain murders” grew out of a climate of repression that was established in prisons throughout the country in the summer of 1988. It was then that “death commissions” convened to interrogate political detainees over their loyalties and pass capital sentences on anyone deemed to still be in revolt against the theocratic dictatorship. Approximately 30,000 people were summarily executed over the course of several months.

There were notable connections between many of those victims and the various assassination targets in Europe and North America. Professor Kazem Rajavi was the representative of the National Council of Resistance of Iran (NCRI) in Switzerland as well as post-revolution Iran’s first Ambassador to the United Nations’ European headquarters in Geneva before resigning shortly afterward in 1980 in protest over the Iranian regime’s egregious human rights record.

He was the brother of Massoud Rajavi, the leader of the People’s Mujahidin Organization of Iran (PMOI/MEK). The pro-democracy group had supported the revolution against the Shah but quickly came into conflict against Ayatollah Khomeini’s efforts to create a system based on absolutist rule, with himself as the leading clerical authority.

In the face of the MEK’s efforts to turn the revolution back toward its earlier democratic aspirations, Khomeini targeted the group for destruction. After all its members were pre-emptively declared guilty of “enmity against God,” the MEK came to comprise the overwhelming majority of victims of the 1988 massacre. Meanwhile, the foreign advocacy of figures like Kazem Rajavi threatened to expose this and other human rights abuses to an international community capable of weakening the mullahs’ tenuous hold on power. So, naturally, Khomeini and his successor, Ayatollah Ali Khamenei, who came to power in 1989, determined that those figures would have to die as well.

The perceived importance of Rajavi’s assassination was underscored by the details that were later revealed about it. It involved cooperation among multiple agencies and Iranian embassies, with at least 13 operatives travelling to Switzerland on “service passports” just prior to the killing, then fleeing to Austria and back to Iran quickly afterwards. Investigations by European authorities identified all 13 by name, and the Swiss eventually issued arrest warrants for each of them as well as for Ali Fallahian, who was Iran’s Minister of Intelligence at the time.

Unfortunately, the pursuit of justice has never gone very far beyond the issuance of those warrants. Two of the 14 individuals were arrested in Paris two and a half years after the killing but were never extradited. The French authorities inexplicably sent them to Iran after declaring that the extradition would somehow be at odds with France’s “national interests.” The incident sent a strong, troubling message regarding Iran’s impunity in certain matters related to human rights and terrorism. And that message has been reinforced on many occasions since.

It is a shameful example of a Western democracy – which is a purported human rights defender – turning its back on the Iranian people and the very concept of justice for an innocent victim of murder in face of the world’s main state sponsor of terror.

The perpetrators of Kazem Rajavi’s assassination have never been punished, and the same can be said of the perpetrators of most of the other assassinations spanning bloody years of Iran’s post-revolutionary history. Worse still, no one has ever been held accountable for the 1988 massacre, even as a growing number of Iranian officials have openly acknowledged and boasted about their roles in the killings in recent years.

One of them sits at the head of the Iranian judiciary, and another fills the role of Minister of Justice. Their presence makes it absolutely clear that no one from within the Iranian regime is going to atone for past crimes. But so far, the international community has sadly shown little interest in directing an independent investigation or opening a case in the International Criminal Court against known perpetrators.

Now, Iran’s pattern of impunity is poised to be extended once again. In fact, it could be extended permanently, at least for those who participated in the killing of Kazem Rajavi. The prosecutor for Switzerland’s Vaud canton has indicated that the case against the 14 suspects would be closed, marking the end of the statute of limitations.

It is a shameful example of a Western democracy – which is a purported human rights defender – turning its back on the Iranian people and the very concept of justice for an innocent victim of murder in face of the world’s main state sponsor of terror.

The Vaud prosecutor has until July 31 reverse the decision to close the case, as the statute of limitations allegedly expires soon. While this isn’t much time, it is time enough to send a message that the era of Iran’s impunity is over. The coming days could set the tone for all of Europe’s future expectations regarding the enforcement of human rights principles in the Iranian regime.

The Swiss government must carefully consider whether it wants to bear the responsibility of telling Tehran it can get away with murder. The whole world in general and Europe in specific are watching since fighting terrorism is a universal duty and challenge.

Iranian Arrest Warrant for US President Described as Risible