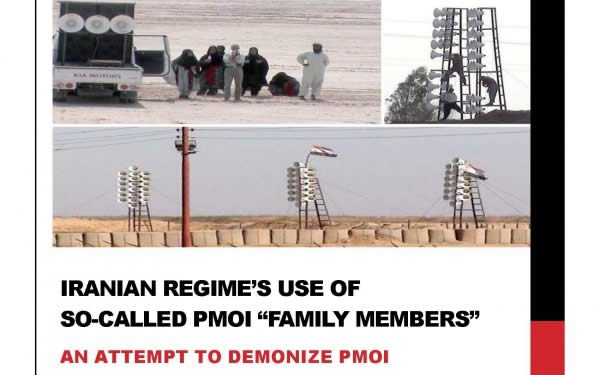 Camp Liberty residents, also known as Ashraf residents, are members of the People’s Mojahedin Organization of Iran, the main opposition movement against the mullahs‟ regime in Iran.

In a joint conspiracy between the Iranian regime, Iraqi Government and former UN Special Representative to the Secretary General in Iraq Martin Kobler, the residents were driven out of their 26 year home in Camp Ashraf and forced into a former US Forces military camp called “Liberty” with prison-like conditions. It is worth noting that as a start up to this conspiracy, Ashraf residents suffered numerous bloody attacks by Iraqi forces, in which dozens of residents were killed and hundreds were injured. In the last attack that took place on 1 September 2013, Iraqi forces slaughtered 52 residents and took 7 hostages. No news ever came out about the fate of the hostages.

Former UN official Tahar Boumedra, who was in charge of the Camp Ashraf dossier in UNAMI until 2012 when the residents were relocated, revealed that the residents‟ relocation was part of a plan at the behest of the Iranian regime to disband the PMOI in Iraq.

The Iranian regime and its elements in the Iraqi government went to any length to reach their ultimate goal, the annihilation of the PMOI in Iraq. The following report and excerpts from residents‟ testimonies reveals how this regime, uses its agents and some  PMOI families to pressure the Liberty residents to succumb to the regime’s demands by direct pressures or preparing grounds for blood baths in camps Ashraf and Liberty.

From the first days of June 2015 elements of the Iraqi government committee tasked to suppress Ashraf and Liberty residents, including Col. Sadeq Mohammad Kazem, transferred a group of agents from the Iranian regime’s Ministry of Intelligence (MOIS) and terrorist Quds Force to the Iraqi army intelligence base and police station adjacent to Camp Liberty, all under the pretext of preparations for the residents‟ relatives being able to see their loved ones inside the camp. They were seen shouting at the residents, “As we destroyed Ashraf, we will tear down the walls in Liberty.”

Who are these individuals and what is their relation with the Iranian regime? The residents are complaining that they are Iranian regime agents and Tehran is intending to begin imposing psychological torture on the residents and prepare for the next massacre against the residents, all under the pretext of requesting family visits. Moreover, the MOIS is known to resort to this tactic to a significant extent to further divert UNAMI and UNHCR, and cloak the truth about the residents.

The Iranian regime used this tactic for the first time in 2010 in Ashraf. To reach an exact and expert conclusion, it is necessary to cite the truth in order to analyze this filthy psychological war, and to understand who these people were and what was their true objective? These people had gone the limits in installing 320 powerful loudspeakers all around Ashraf and placed its residents under psychological torture for 677 days. Now, they are planning to repeat the same scenario in Liberty. Are they truly the residents‟ families and relatives, or are they actually MOIS agents? And who are the true families and relatives of these residents now in Camp Liberty? Where are they, what are they doing, especially those in Iran under the criminal mullahs‟ rule? Hassan Danaifar, the Iranian regime’s ambassador in Baghdad went to Ashraf on 17 November 2014 and “expressed his hope that soon the pain-stricken and suffering families of members of the People’s Mojahedin Organization of Iran (PMOI) will reach Camp Liberty, and this will mark the end of their separation and frustration.” A month prior to that on October 16 in a meeting with an MOIS element in the mullahs‟ embassy in Baghdad he said he “will continue his efforts to establish relations between the Rajavi sect and their families, and in this regard he will use all the capacities of the embassy of the Islamic Republic of Iran in Iraq.” (MOIS website) The best and most vivid evidence are the PMOI members and residents of Ashraf and Liberty who can testify in this regard.

In this booklet we have published excerpts of letters from two groups of Liberty residents to UN officials. The first group is residents whose family members have been hired by the MOIS. The second group consists of residents whose families have been identified, arrested, torture and in some cases executed for visiting or having contact with Camp Ashraf or PMOI members.