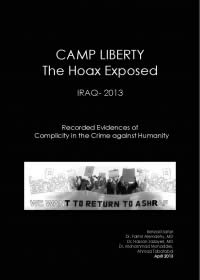 The Hoax Exposed – Complicity in crime against humanity

Well over 15 months has passed since the ‘relocation’ of Camp Ashraf residents to a new location called Camp ‘Liberty’ near Baghdad, Iraq. This meant to be a prelude to a peaceful resettlement of a community of legal political refugees outside of Iraq. But in reality no significant resettlement occurred and it turned out to be a pre-planned cruel hoax by the Iranian regime, Prime Minister of Iraq al-Maliki and SRSG Martin Kobler to dismantle the main opposition of the Iranian regime, People’s Mojahedin Organization of Iran (PMOI).
This book is a collection of interviews, lectures and articles of international personalities, legal advisers, government officials and experts on international human right standards on the topic. The book tries to preserve impartiality and integrity by inputting documented evidences and testimonial accounts with diverse perspectives in evaluating the facts.

How Did It Begin?

Following the massacre of Ashraf residents on April 8, 2011 executed by the Iraqi forces, High Commissioner Pillay declared on April 15:‚ There is no possible excuse for this number of casualties. There must be a full, independent and transparent inquiry, and any person found responsible for use of excessive force should be prosecuted ‛. This call was endorsed the next day by the SRSG Ad Melkert. Similar international appeals were lodged by the U.S. State Department; Senator John Kerry, then Chair of the Senate Foreign Affairs Committee; Baroness Ashton, High Representative of EU; the Amnesty International; and many other international bodies. However, they were soon ignored and neither UNAMI, nor OHCHR did take any further steps for an all-out investigation despite residents’ demands for more extensive measures. Government of Iraq noticed this silence and inaction with no projected investigation and was encouraged to press forward. In a bid to distort the reality, GoI called for the expulsion of PMOI from Iraq by the end of 2011, and displacement of Ashraf residents inside Iraq.

After the April 2011 massacre, residents’ representatives suggested an alternative
plan for Camp Ashraf to be placed under monitoring and control of the UNHCR and UNAMI and that UNHCR would confirm the collective refugee status of all residents who had already been legally residing in Iraq as refugees since the 1980s. Nevertheless, at the suggestion of High Commissioner Antonio Guterres in August
2011, the residents accepted to present their individual refugee applications to the

UNHCR. Subsequently, the High Commissioner immediately declared that all these people are asylum-seekers under international protection. Then, UNHCR announced its readiness to conduct the Refugee Status Determination (RSD) process in facilities adjacent to Camp Ashraf and this process was to begin toward the end of October
2011. Nonetheless, Iraqi government obstructed the process and preconditioned it to departure of residents from Camp Ashraf.