The Iranian regime has a long history of trying to influence Western policy through clandestine lobbying and coordinated disinformation campaigns. Such activities have helped to muddy the waters regarding Iran’s past nuclear work, to demonize or discredit leading Iranian opposition groups, and to simply promote talking points that are favorable to the clerical regime, such as the idea that economic sanctions are more harmful to the general population than to government institutions.

The National Iranian American Council (NIAC) is a well-known group in the U.S. parroting Iran’s regime narratives and since the new administration took office, have been insisting the regime’s demand that as for the Iran deal, Washington should drop all the sanctions that were re-imposed or expanded under the previous administration, regardless of the fact that the Iranian regime had gone beyond the levels of nuclear stockpiling and technical sophistication that it had established before the JCPOA went into effect.

Earlier this month, New Mexico Representative Yvette Herrell was joined by eight fellow members of the U.S. House of Representatives in writing to the Department of Justice to urge an investigation aimed at identifying and prosecuting any Americans who have been paid to secretly promote the Iranian regime’s talking points. The need for such an investigation had previously been underscored by the arrest of Kaveh Lotfolah Afrasiabi, a Massachusetts political scientist who is accused of violating the Foreign Assets Registration Act by writing articles and opinion pieces on Iranian affairs while receiving approximately 265,000 dollars from the Iranian regime.

Herrell’s appeal was not the first of its kind. Little more than a year earlier, three U.S. Senators also wrote to the DOJ with a more narrowly targeted request. After referring to a pattern of activities that include not only promoting pro-Iran talking points but also facilitating meetings between U.S. congresspersons and Iranian officials, the senators described the NIAC as an organization whose “innocuous public branding masks troubling behavior.”

“We ask that the Department of Justice evaluate whether an investigation of NIAC is warranted for potential FARA violations and to ensure transparency regarding foreign attempts to influence the U.S. political process,” the letter concluded.

In the absence of any apparent increase in scrutiny by the DOJ, a NIAC senior research analyst named Sina Toosi published an opinion piece in the USA Today on Monday, which noticeably parroted the Iranian regime’s public talking points regarding the JCPOA and the future of Iranian diplomacy. After criticizing the Biden administration for failing to “firmly break” with its predecessor’s strategy of “maximum pressure,” Toosi insisted that “the diplomatic door will close” if the U.S. does not join its European partners in offering concessions to the regime immediately.

Meanwhile, the European signatories to Iran deal remain preoccupied with simply preserving it at any cost.

This is very likely a testament to the effects of Iranian influence operations within the European Union, which has long been criticized for policies that prioritize friendly relations with the Iranian regime and thus downplay malign activities. These include but are by no means limited to the past two years’ systematic violations of the JCPOA. In fact, even before those violations began in earnest, four operatives for the Iranian regime, including a high-ranking diplomat, were arrested for plotting to set off explosives in the heart of Europe at an annual gathering of expatriates, pro-democracy activists, and their political supporters.

The investigation into that diplomat, Assadollah Assadi, established that he was operating upon the explicit instruction of authorities high up in the regime’s leadership. It also made it clear that his effort to oversee the terrorist attack was only one part of a much larger European mission – a mission that no doubt included efforts to influence Western policies through both violent and non-violent means.

When Assadi was arrested in Germany, he was found to be in possession of various documents that comprise evidence for his cultivation of a network of operatives who might be used in further terrorist activities, in surveillance of Iranian dissidents, and in the propagation of pro-regime talking points via Western media outlets and direct appeals to European lawmakers. Records of Assadi’s travels and meetings indicate that at the time of his arrest, he had had contact with dozens of human assets spanning at least 11 European countries and that many of them had received substantial cash payments. It remains to be determined what services the operatives rendered to earn those payments, but a recent letter from another target of Iranian government influence may suggest a partial answer.

In February, an Iranian expatriate sent a letter to the United Nations Secretary-General in which he describes joining the leading Iranian opposition group, the People’s Mojahedin Organization of Iran (PMOI-MEK) in 2003, then leaving in 2016 after relocating to Albania along with a core MEK community that had been struggling to survive in Iraq since the withdrawal of U.S. forces from that country. Within weeks of leaving, said the author, Hadi Sani-Kani, he was approached by representatives of the Iranian Ministry of Intelligence and Security (MOIS) and strong-armed into providing services as a purveyor of disinformation about the pro-democracy Resistance.

Sani-Kani described in detail the process whereby recruits like him were paid to provide a steady stream of editorial and media appearances, often utilizing the label of “former MEK members” to give a veneer of legitimacy to claims about the organization, which was ultimately manufactured in the offices of the MOIS. The letter also provided a number of names associated with these and associated activities, including that of Massoud Khodabandeh, an MOIS agent in London, who has been credited as an independent analyst in a number of Western media outlets despite having firmly-established ties to the MOIS.

“As a living witness, I can testify in any court that these interviews and articles all stem from the designs and plans of the Ministry of Intelligence,” Sani-Kani said of the countless materials that had been distributed by his network over a period of four years. He also offered to provide “evidence and documents” that would help to corroborate his personal story and presumably provide a solid foundation for the investigation of other Iranian influence operations.

Other Iranian regime influence operations that must be scrutinized include any that are associated with Assadi’s network and any that are currently exerting pressure on the U.S. administration toward U.S. policies that are more favorable to the Iranian regime.

At Nowruz, Iranian people look to West for support of new day 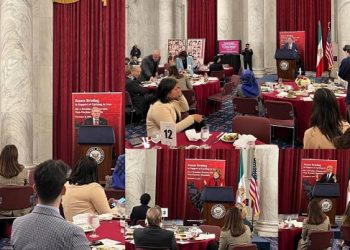 Iran Uprising Supported by a Group of Bi-partisan U.S Senators