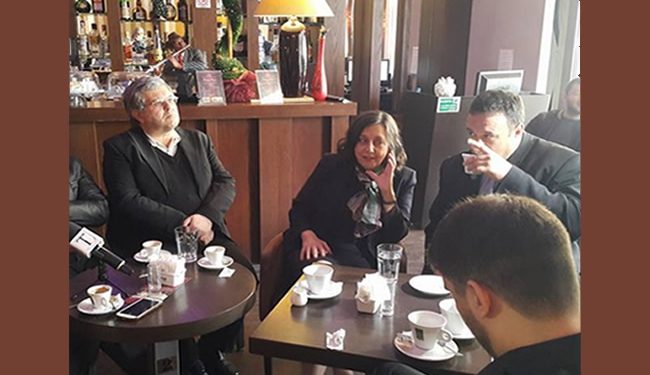 On December 3, the last trial sessiuon of Assadollah Asadi, a diplomat of the Iranian regime, and three of his accomplices for a terrorist plot was held in the Belgian court of Antwerp. Of course, the Iranian regime had made a diplomatic cover for Assadollah Asadi so that he could carry out a terrorist plot under diplomatic cover.

The four planned to detonate a powerful bomb on June 30, 2018, at a rally of Mujahedin-e Khalq (MEK) in Paris attended by tens of thousands of people. If they succeeded, it would be a definite bloodbath. Since the operation failed and the agents involved bear similarities to the Iranian regime’s terrorist activities in Albania, it should be a matter of concern for the Albanian public opinion.

The main defendant in the Belgian court is Assadollah Asadi, the head of the regime’s intelligence service in Europe, who worked as an Iranian diplomat based in Austria. He delivered the bomb to an Iranian couple, Amir Saadouni and Nasimeh Naami, at a pizza restaurant in Luxembourg. However, on his way back to Austria, he was arrested by German police in his own car in Germany. The couple also traveled among MEK’s supporters in Europe for more than a decade as a sleeping cell of the Iranian Ministry of Intelligence (MOIS). They were granted Belgian citizenship and lived there. They were supposed to detonate the bomb during the ceremony but were arrested on their way to Paris, in Belgium. The fourth defendant, Mehrdad Arefani, was also an agent of the MOIS under the cover of a supporter of the MEK. He had infiltrated the MEK’s supporters to provide to collect information and pass it to the Iranian regime. He also lives in Belgium and worked closely with Asadi.

The Belgian prosecutor has requested 20 years in prison for Asadi, 18 years for the couple, and 15 years for Arefani. The judge declared that he would announce his final verdict on January 22, 2021.

Following the start of the uprising and demonstrations in January 2018 in Iran, in which the MEK played a pivotal role, on January 1, 2018, Ali Shamkhani, Regime’s Secretary of the High-Security Council, said: “The MEK will receive an appropriate response from Iran where they do not expect it.”

Plan A‌ for the Iranian regime was a bomb blast during the Iranian New Year celebration on December 20, 2018, in Albania, in which Maryam Rajavi, President-elect of the Iranian Resistance, as well as Rudy Giuliani, President Trump’s personal lawyer, and Albanian figures were attended. However, the plan was thwarted by the arrest and expulsion of two Revolutionary Guards’ agents who had come to Albania as journalists and cameramen to carry out the plot. Following the failure of this plan, the regime put Plan B on the agenda in Paris. This plan also failed, and four terrorist bombers were arrested.

An investigation by the Belgian court revealed that the MOIS used a woman, Nasima Na’ami, to tarp Amir Saadouni living in Belgium as  a supporter of the MEK. Eventually, Saadouni married Nasima Na’ami and was connected to the MOIS through her. Despite being political refugees in Belgium, the couple secretly traveled to Iran several times for terrorist training against the MEK. In court, Amir Saadouni emphasized that during his visits to Iran, he was threatened by the MOIS that he should cooperate with the Iranian regime. However, the Belgian prosecutor denies this claim, saying that the couple cooperated with the MOIS purely for money and carried out the operation. Belgian investigators are surprised by the amount of cash they found at the couple’s home. Their last briefings and training were done for two weeks in a hotel in Tehran by a person named Mohsen. Evin Hotel is one of the luxury hotels used by the MOIS to brief its agents who are taken to Iran from Europe and Turkey. Last February, the Iranian regime took two Albanians, Olsi Jazexhi and Gjergji Thanasi to Iran and accommodated them at the same Evin Hotel.

The Iranian resistance has revealed that the Iranian regime pays each of these two 1,000 euros a month to lie, slander, and insult the MEK as part of its demonizing campaign against ME in Albania. For the Iranian regime, such activities are preparing public opinion for further terrorist attacks against the MEK. Less than four months before the bombing plan against the MEK in Tirana, Olsi Jazexhi and Gjergji Thanasi held a meeting in Tirana in November 2017 expressing the MEK’s members are considered terrorists and deserve punishment. The key speaker in this meeting was one of the notorious agents of the Iranian regime, Ann Singleton, who according to official reports in the United States and the British Parliament, is an agent of the MOIS.

There are many questions that these two individuals must answer clearly for the sake of the security and public opinion of the Albanian people, including:

– Was their host, on their last trip to Tehran and Evin Hotel, the same Mohsen who briefed Amir Saadouni, or he was someone else, what was his name?

– Olsi Jazexhi confirms in his own voice on YouTube that they are taking money from the Iranian regime. How much have they received so far?

– After their last visit to Iran, they have multiplied their attacks against the MEK daily. They have also stepped up their attacks on the Albanian government, which the Supreme Leader of the Iranian regime called an evil little country. Who orders them to do so?

– They have access to some information about the members of the MEK that is only in the possession of the Ministry of Intelligence of the Iranian regime. Who, in Iran, provides this information to them?

Of course, there are many other questions that the public must be informed of the answers. Like why these two people whenever   terrorist and criminal affiliated with the Iranian regime is expelled from Albania, they regard it as a conspiracy and condemn the Albanian government in favor of the criminal Iranian regime. The list of questions is long, but the few I have asked are enough to keep us awake and alert in Albania.