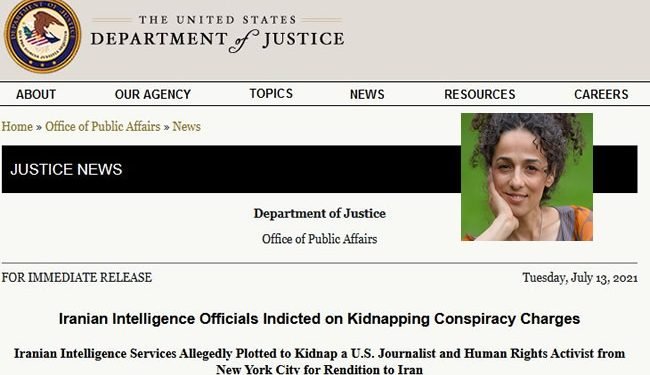 Iranian intelligence agents plotted to abduct an Iranian American journalist living in Brooklyn and take her to the Middle Eastern country, possibly via a daring maritime evacuation, the Justice Department alleged in an indictment unsealed Tuesday.

An indictment in Manhattan federal court alleges that the plot was part of a wider plan to lure three individuals in Canada and a fifth person in the United Kingdom to Iran. Victims were also targeted in the United Arab Emirates, authorities said.

The identities of the alleged victims were not released but Brooklyn-based Masih Alinejad confirmed that authorities had told her she was among the targeted victims.

“I knew that this is the nature of the Islamic Republic, you know, kidnapping people, arresting people, torturing people, killing people. But I couldn’t believe it that this is going to happen to me in United States of America,” Alinejad told The Associated Press.

Iran’s mission to the United Nations did not immediately respond to a request for comment. State media in Tehran did not immediately acknowledge the alleged plot, though Iran has become more aggressive in recent years about seizing opposition journalists and dissidents abroad amid tensions over its tattered nuclear deal.
In this regard The Iranian Resistance NCRI strongly condemned the clerical regime Intelligence Ministry’s plot against Ms. Masih Alinejad and four other Iranians in Canada and the United Kingdom.