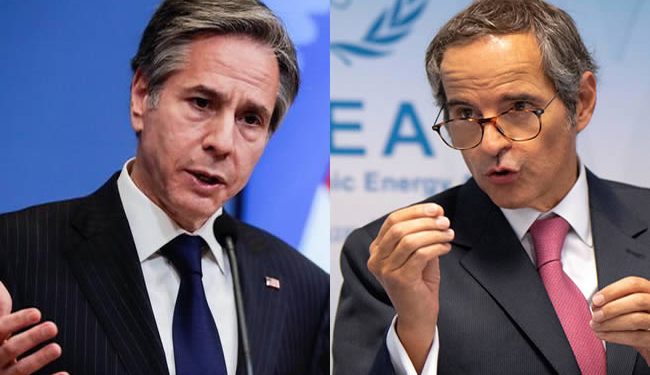 US and IAEA demand Iran answer on monitoring

The U.N. nuclear watchdog on Friday demanded an immediate reply from Iran on whether it would extend a monitoring agreement that expired overnight, prompting an Iranian envoy to respond that Tehran was under no obligation to provide an answer.
Also US Secretary of State Antony Blinken said on Friday: The lack of an interim agreement between the UN nuclear watchdog and Iran on the monitoring of nuclear activities is a serious concern that has been communicated to Tehran.

Struck on February 21, the interim monitoring deal was valid for three months, then extended by a month on May 24. The International Atomic Energy Agency (IAEA) has said it expired on Thursday. It is in talks with Iran on another extension.

“This remains a serious concern,” Blinken told reporters at a news conference in Paris alongside his French counterpart Jean-Yves Le Drian. “The concern has been communicated to Iran and needs to be resolved.
A spokesman for the IAEA said that Director General Rafael Mariano Grossi would inform the IAEA Board of Governors on the matter during Friday.

Tehran started violating some of the limits set by the 2015 nuclear deal, the JCPOA, in 2019 while sticking to its position that it had no nuclear weapons ambitions. Iran’s action was in response to heavy sanctions imposed by the Trump administration when it left the JCPOA. President Joe Biden is seeking to revive the agreement.

Iran has elevated both the level and quantity of the uranium it enriches far beyond the limits of the deal. Some of the uranium is enriched to above 60 percent purity, which takes Iran very close to obtaining 90 percent enriched fissile material for making a nuclear bomb.